Transformation Can Turn the Tables on Disrupters

There was a time when being disruptive was considered socially rude and inappropriate. In today’s business environment, disruption is often considered essential for survival. Businesses either disrupt others or they find themselves being disrupted—and displaced. Companies today often have to reinvent themselves (transform themselves) to gain a competitive edge. Let’s look at one example of how one company used transformation to turn the tables on the disrupters.

It’s not news to anyone that companies such as Amazon.com (and others) dramatically changed the way that people shop. It may seem like Cyber Monday has been around forever, but it got its start in 2005 (a concept conceived by Shop.org, division of the National Retail Federation). It was a harbinger of Christmas Shopping to Come (and of a huge shift to online shopping in general).

Consumers embraced the idea of being able to shop and compare from the comfort of their own homes. They didn’t have to fight crowds. Online shopping made it easier to not only shop for the best price but to compare features side-by-side.

While online shopping was a huge boon for consumers, it was a huge disruption for many conventional brick and mortar stores. Perhaps no industry (or section of an industry) was hit as hard as retailers who sold electronics. 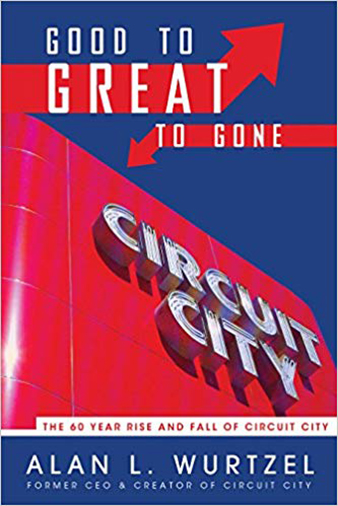 One company, in particular, was devastated by this trend. Circuit City had gone from a small Mom & Pop store to the best performing Fortune 500 Company for any 15-year period between 1965 and 1995. By 2009, they had gone through bankruptcy and liquidation. Good to Great to Gone (one of our featured resources) tells that story.

The Other Option: Transformation

Not every conventional retailer was destroyed by this disruption. Smart businesses began looking for ways to adapt—and to transform their ways of doing business. They made adjustments so they could survive and even thrive.

One of those businesses was one of Circuit City’s biggest competitors: Best Buy. There were a lot of similarities between the two companies. They carried similar (sometimes identical) products. They went after the same basic audience. Both companies had significant physical footprints in their markets. They often competed on price. So how did Best Buy survive when Circuit City went out of business?

Best Buy CEO, Hubert Joly, wasn’t content to continue doing “business as usual.” A CNN article entitled, “Best Buy CEO Hubert Joly has nothing to sell you” tells the story of how Joly transformed the way Best Buy did business so that the company not only survived—but turned Best Buy’s stock into a best buy!

You’ve probably heard the expression: “Nothing succeeds like success.” And yet, both Circuit City and Best Buy had been successful. One survived and the other did not. It’s true that a company’s success often leads to additional success. It’s also true that nothing teaches like failure.  That’s why it is so important to observe—and learn from—companies that didn’t transform themselves and paid a terrible price.

Change and Disruption Aren’t Going Away

One of the things I keep hammering away at with the companies I coach is that transformation isn’t a one-time thing. It is an ongoing process. Change and disruption aren’t going away. If you’re serious about scaling up your company, you have to be vigilant about continually transforming your company in anticipation of the changing needs of your customers and clients.

There are a lot of simple—but insidious—traps that can stop growing companies from scaling up. I invite you to download our free eBook, How to Avoid the Growth Traps, to protect your growing business from some of the things that can keep you from success—or even kill your business.